Edited by Austin Kocher, these essays hope to provide a useful snapshot of precisely the kinds of issues that are being raised by the Trump administration, while also understanding that the current context of immigrant precarity unquestionably precedes the 2016 election.

fter Donald J. Trump won the U.S. presidential election on November 8, 2016, the organizers of the Annual Meeting of the American Association of Geographers solicited panel discussions to address key themes of the coming administration that are relevant for academic geographers and related disciplines. The following panel, “Trump and Immigration Enforcement: The First 100 Days,” was created to bring together geographers whose fieldwork and reputation made them well-positioned to speak to the on-the-ground realities of immigration enforcement by the time the AAG Annual Meeting was underway in Boston in April, which was still within the new administration’s first 100 days of governance. That panel drew a large engaged audience, and generated considerable discussion about the overarching themes and everyday details about how immigration enforcement had changed (and more importantly, had not changed) with the transition of presidential power.

In the weeks and months following the election and inauguration of Donald Trump, I spent much of my time responding to concerns from friends that ICE would come for them or their family, meeting with city officials about how meaningful policy changes could protect immigrants, and creating space for immigrant voices at the front of local political organizing efforts. Through that work, I also saw the immigrant community in Columbus, Ohio, struggle internally with trying to publicize what felt like an increase in ICE activity, and yet also regulate the line between panic-driven rumors and documented fact. But it wasn’t just the immigrant community that responded sometimes too-hastily to fears; well-intentioned allies with little connection to the immigrant community also sought to raise immigration-related concerns, sometimes with the effect of alienating the very communities they sought to protect. We should fault neither immigrants nor allies for the confusion: the US immigration control regime is legally complex, operationally secretive, and ethically duplicitous, all of which makes organized resistance extremely difficult. As each of the authors point out in their essays, the hard-won understanding that immigration scholars have earned over years of plodding through the dilapidated architecture of immigration laws and interviewing immigrants, attorneys, and federal agents, is valuable in an era of executive incompetence, misdirection, and ‘alternative facts.’

As if to highlight the on-the-ground confusion and panic over the roll-out of Trump’s brand of deportation policing, the day before the AAG panel was scheduled, Maribel Trujillo-Diaz, a long-time resident of Cincinnati, Ohio, and mother of four US citizen children, was arrested and deported to Mexico. Many people in the community called on ICE to exercise discretion and allow her to stay: her family, the immigrant community, members of her Catholic church, immigrant rights groups across Ohio, an immigrant rights law firm, and even the Republican governor of Ohio, John Kasich. Activists also made an unsuccessful last-ditch effort to prevent her deportation by holding a vigil outside of the ICE facility where she was being held. To explain why Maribel was deported now, even though she had been allowed to stay in the US for years, her deportation officer said, “I don’t know if you are aware, but we have a new president. Things are different now” (Pilkington, 2017).

But were things “different now”? As the weeks wore on and more immigrants were taken into ICE custody during routine check-ins, attorneys I spoke with began to describe a shift in what they consistently called the new “attitude” of the Department of Homeland Security. By attitude, they meant that where there was any discretionary latitude in the legal edifice of the deportation regime, ICE was now operating with full prejudice towards all immigrants, particularly those whose compliance with ICE’s orders of supervision made them easy targets for deportation. The gloves were off. And yet the infrastructure that allowed them to do this—a network of detention centers, information sharing programs between local police and the federal government, and the largely false distinction between criminal and non-criminal immigrants—had been dramatically expanded during the two Obama administrations. Asking what is ‘different’ in 2017 is, perhaps, an effect of political ideology that mistakes superficial changes in presidential figurehead for the ongoing organic crisis of race and class in the United States, one that has come into focus around police violence, gentrification, and the ongoing exploitation and exclusion of non-citizens.

In the essays that follow, we hope to provide a useful snapshot of precisely the kinds of issues that are being raised by the Trump administration, while also understanding that the current context of immigrant precarity unquestionably precedes the 2016 election. In fact, the central thesis of the remarks at the panel session, which are reflected in these papers, is this: although the Trump administration represents an unapologetically brutish discourse around immigration enforcement, there is very little true novelty in the way that the Department of Homeland Security is enforcing immigration laws. The egregious practices of detaining immigrants for civil violations, turning away asylum seekers at the border, using criminality to justify deportation, relying on the discretion of low-ranking officers to decide who stays and who gets deported—these are longstanding operational norms within the Department of Homeland Security. November 8, 2016 exacerbated these problems and brought these realities to the attention of a public that had grown complacent during the second term of President Obama. In this way, we both recognize the anti-immigrant sentiment behind the statement by the ICE officer above and also call it into question.

Like the authors that follow, I am waiting to see if the recent surge in immigrant rights mobilizing can yet be harnessed into a movement that persists beyond the election cycle, beyond parties, and beyond borders. In the first preface to her book on totalitarianism, Hannah Arendt (1973) wrote, “without the fictitious world of totalitarian movements, in which with unparalleled clarity the essential uncertainties of our time have been spelled out, we might have been driven to our doom without ever becoming aware of what has been happening.” There is a sense today, based on my observations with activists, attorneys, and immigrants across Ohio and elsewhere, that the shock of Trump’s election did provide “unparalleled clarity” about just how legally fragile it is to live in the United States without citizenship. Although I want to be careful not to normalize the concept of citizenship as an unequivocal good, it is important for those who don’t have to worry about being deported to appreciate the everyday vulnerability for those who do. To the extent that Trump’s election and subsequent executive orders has served to highlight this essential vulnerability created not by migrants but by the hegemony of the nation-state, and to the extent that immigrants and non-immigrants are able to build the social and political capacity to resist Trump’s deportation agenda, there is sufficient reason to stay thoughtfully, doggedly, and ethically engaged in the struggle for immigrant justice.

Pilkington E (2017) Mother of Four to be Deported to Mexico in Sign of Trump Policy Shift. The Guardian. Last accessed on: April 6, 2017. 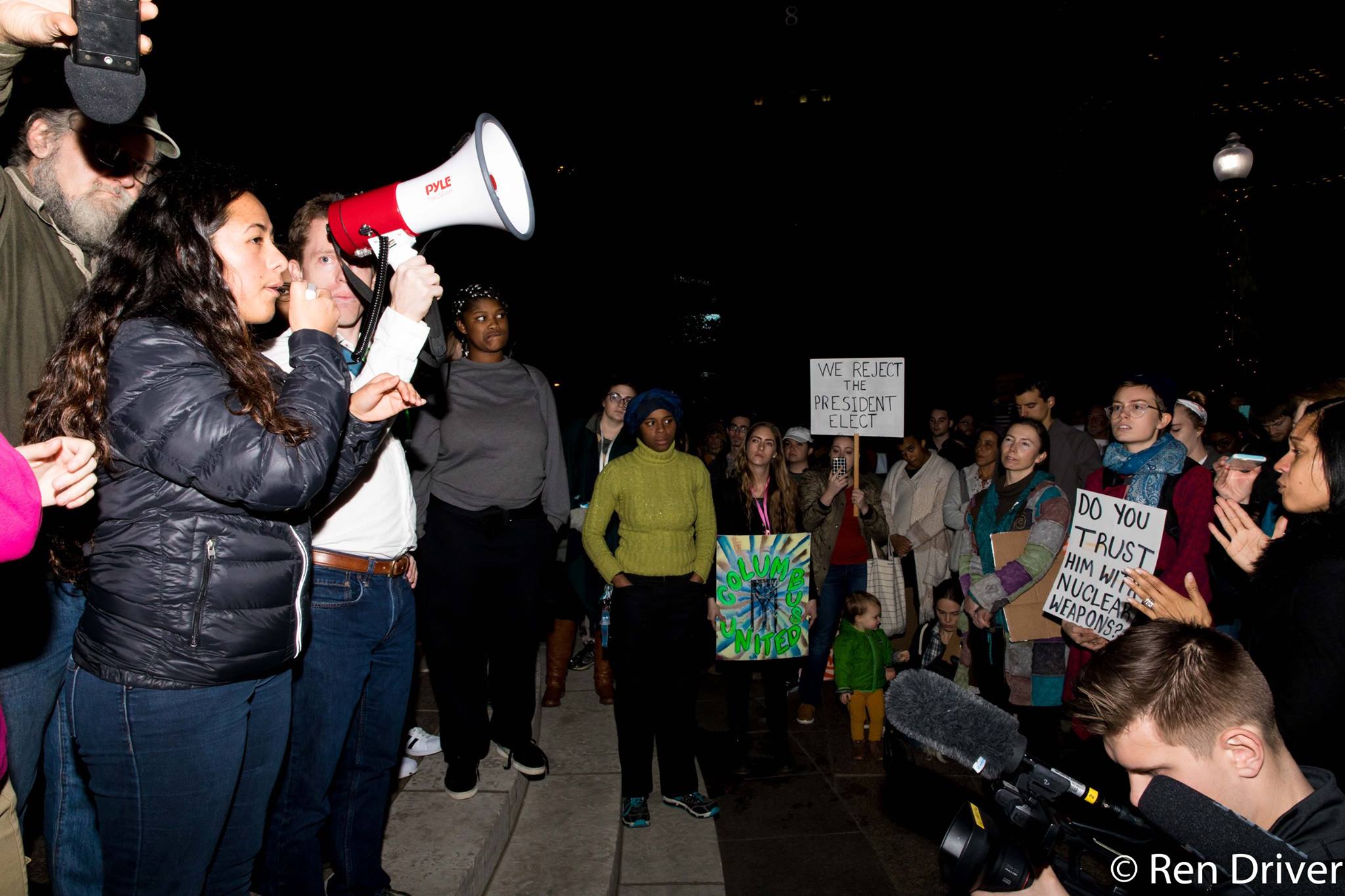 In offering my reflection, I want to highlight two dimensions of the current administration’s immigration enforcement strategy that are particularly disturbing, and that suggest that a shift is taking place with respect to the monetized value of immigrants vis-à-vis profit-seeking and detention expansion. 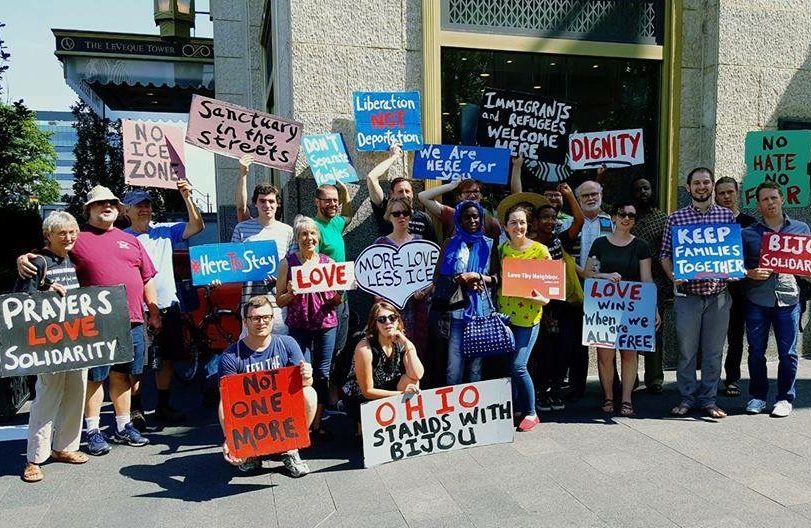 Cautions For Activist Strategizing In The (Anti-)Trump Era

Donald Trump’s aggressive, brash approach to immigration enforcement has sent shockwaves around the United States and beyond. His actions are unpredictable and dramatic, and leave those who support immigrants reacting and hastily responding, with a sense that the ground is shifting under our feet. In this short essay, I offer a few cautions as we make our way through this seeming chaos. 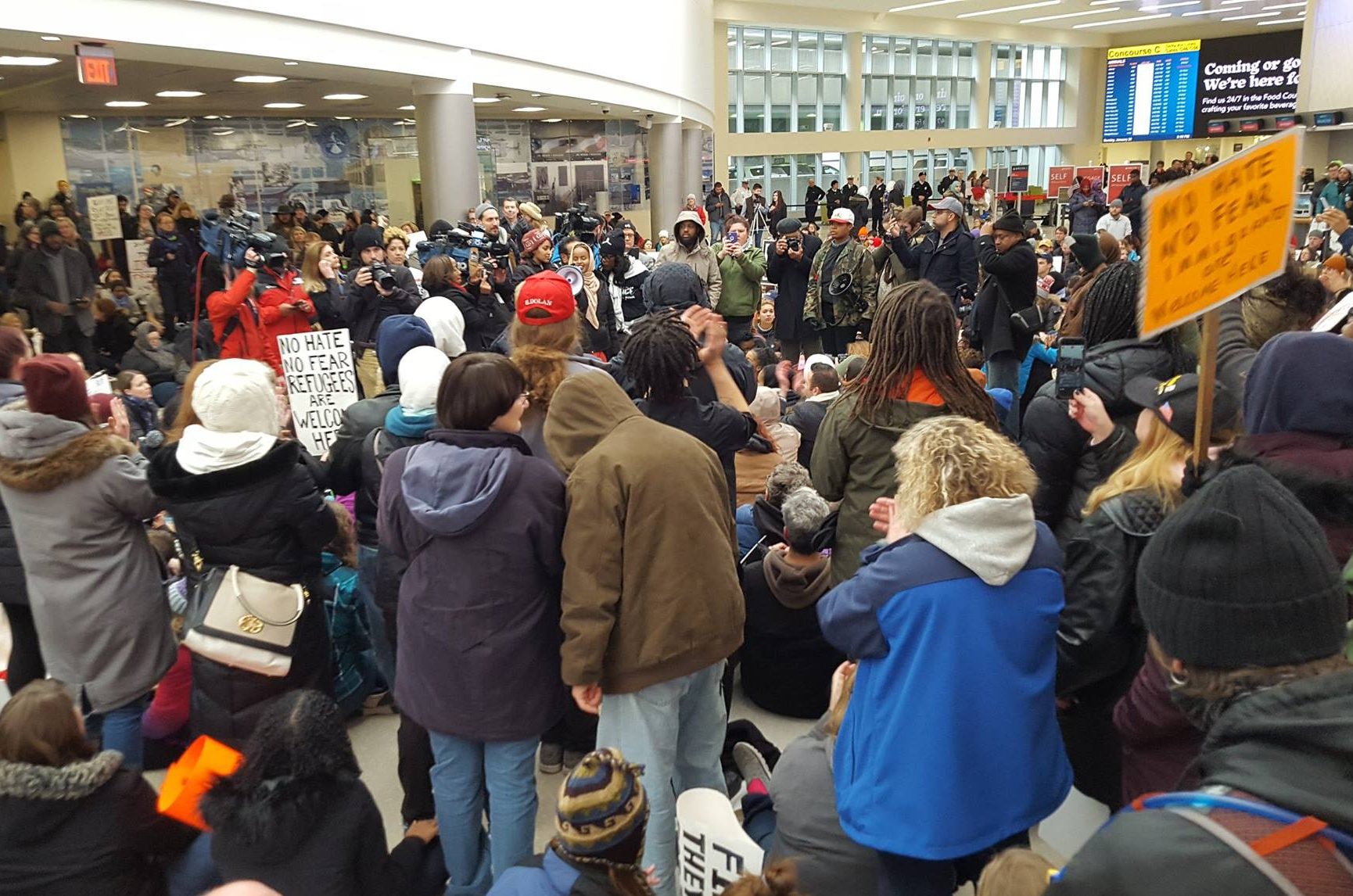 The Border’s Temporal Reach And Us Immigration Enforcement Under Donald J. Trump

I’d like to consider several ways that geographers might revisit the legal and spatial categories frequently mobilized to interpret the contemporary landscape of immigration policing in the United States, and then consider how such conceptual innovation, mobilized by geographically-attuned scholarship, might substantively contribute to popular resistance against Trump’s immigration agenda in the months and years ahead. 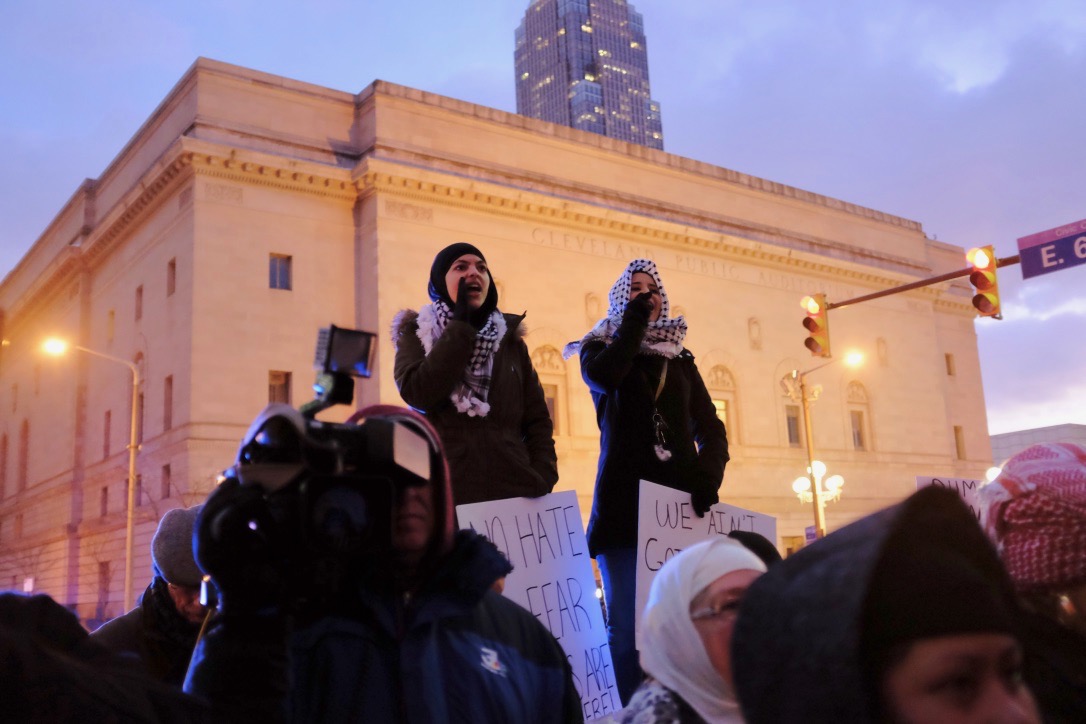 Fear Or Resistance? Immigrant Community Responses In The Age Of Trump

We are entering into a new era of public interest in the border, immigration, and deportation. While there has been a general continuity between Obama and Trump in terms of the substance and style of enforcement, the newfound interest has a significant impact in changing the imaginary of enforcement for the majority of the population who previously had little to no understanding of the issue. 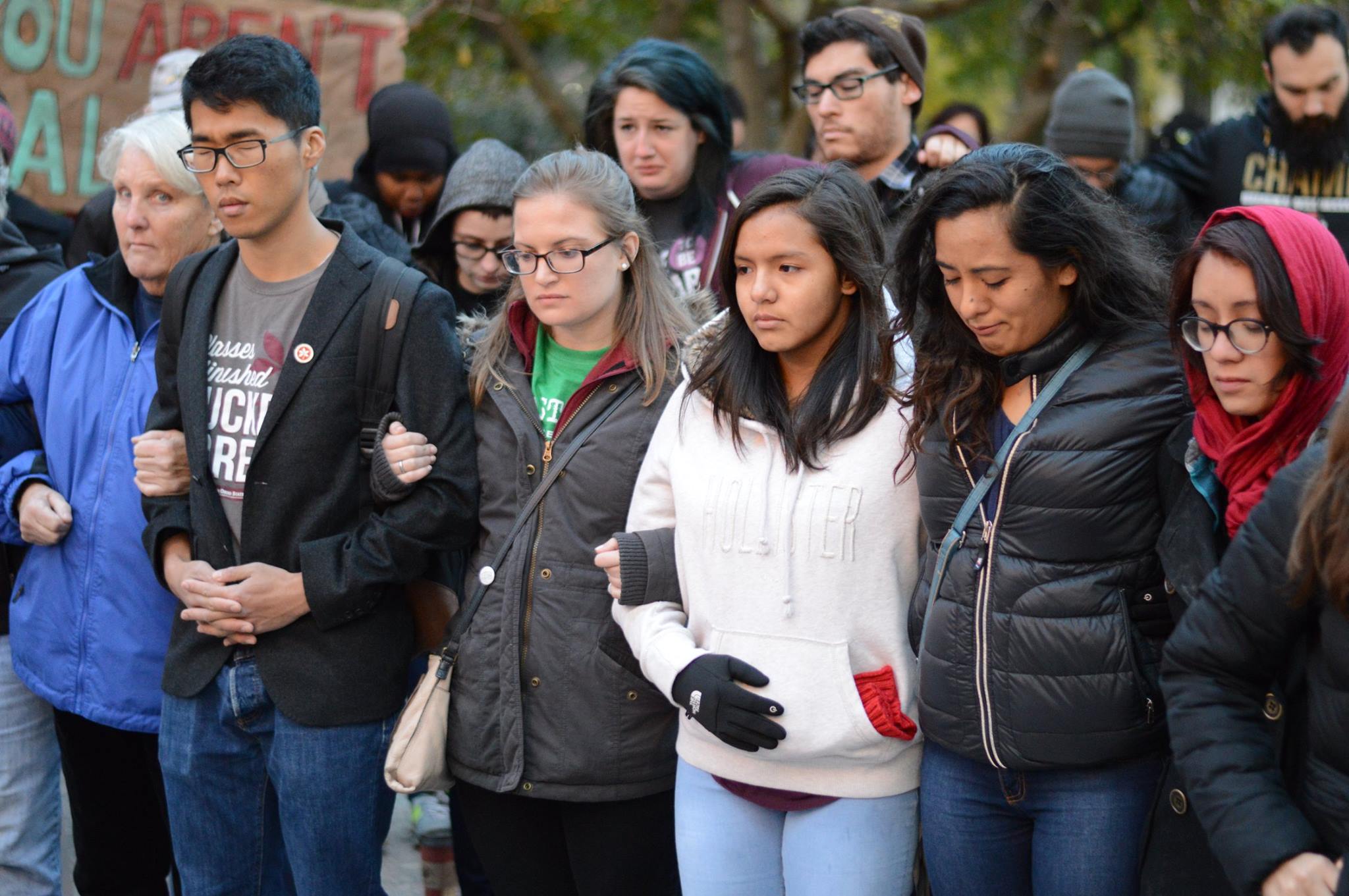 Nativism, Nationalism, And The Hardening Lines Of Citizenship

What has become drawn more firmly in the current administration, then, is the border between citizens and non-citizens. That is, authorized aliens were (and still are) admitted to the territory of the U.S. in various immigrant and non-immigrant visa categories.