“the making of migration encapsulates “the making of the subjects”– how some individuals are racialised, labelled and governed as migrants and what these individuals produce and open up – while simultaneously gesturing towards the reshaping of Europe’s geography as it stems from the multiplication of border zones, border controls and migrants’ spaces of movement.”

ieldwork and theoretical engagement come together in The Making of Migration, offering a striking contribution for both social scientists and political theorists. By explicitly paraphrasing E.P.Thompson’s famous statement – “the class made itself as much as it was made” – the title encapsulates the main vector around which each chapter is organized. Migration is not conceived as an already given object of research, such as a sociological group or a set of individual biographies. Rather, it is the result of governmental practices, laws, discourses as well as of subjective resistances. The book tracks the multiple ways through which something like “contemporary migration” comes into existence by showing its historical conditions and conflictive political dimension. On the one hand, the recurring use of terms such as “de-fetishization”, “undoing” or “de-naturalization” marks the epistemic relevance of fieldwork. Hotspots, alpine borders or Scientific Police Headquarters offer the material ground on which to follow power-knowledge relationships and to test given political concepts. On the other hand, these sites are selected for their capacity to illustrate global rationalities, rather than a comparative study of different regions. The unpacking of “the making of migration” is fueled by this productive tension between critical theory and fieldwork, without resolving it on one of the two poles.

But how migrations are governed and envisaged? The first chapters of the book explore the notions of “migration multiplicities” and “singularities”. Questioning the methodological individualism that underpins both political literature and migration studies, these two concepts also reveal the limits of Foucauldian notions of “population” and “bodies” for an understanding of contemporary migrations. Differently from populations, migrant multiplicities are non-homogeneous and extremely temporary collective formations. They may be constituted by physical concentration of migrants on a border as well as through a process of data extraction, abstraction and assemblage. Police operations as Mos Maiorum, Frontex agents’ interrogation at European harbors or radar activities do not focus on who individual immigrants are but rather on their routes, logistics (smuggling, activists, NGOs) and flows in order to produce general profiles and trends. They answer the question “how a border is governable?” rather than “who are the migrants on the border?”. The notion of “migrant singularities” is not opposed but deeply intertwined with that of “multiplicities”. Singularities are not only produced through direct interpellation: fingerprint databases allow to spot changes of status (i.e. asylum seeker, refugee, illegalized) and geographical locations (the multiple places of detection) extracting data at distance. Disciplinary hold on bodies, broadcast surveillance and data abstraction are thus relatively autonomous elements concurring in the assemblage of “generalized singularities”. They constitute the governmental knowledge which is fundamental for the making of migrations.

Security studies and mobility studies are productively interrogated from the viewpoint of migrant multiplicities and singularities. First, the concept of surveillance is broadened beyond constant monitoring by a “technological eye” staring at the individual. EU databases elaborate maps of risk and probability which do not imply the effective presence of migrants or movements, but rather a set of “migratory events” from which to infer the degree of governability of geographical spots. In addition, specific intertwinement between finance, discipline and humanitarianism are explored through the 2016 Refugees Cash Assistance Program in Greece. Refugees debit cards exemplify the multiplication of mediations between migrants and States or humanitarian actors, and consequently the multiplication of their subjective outcomes. Secondly, mobility is considered not only as an object to be governed but also as particular kind of hold on migrants. The eviction of Calais Jungle opens the discussion on how migrants are constantly kept on the move in order to limit their livability and to hamper the formation of collective political subjectivities. The strategies of dispersal, whose colonial roots are retrieved, characterize a “biopolitics through mobility” by which migrant lives are systematically debilitated, blurring the limit between the Foucauldian “making live or letting die”.

Finally, the argumentation is crisscrossed by scenes of resistance: from the Ventimiglia self-organized camp, to the Vienna-Budapest march and the occupied shelters on the Alps. Resistance plays an epistemically pivotal role in the whole architecture of the book and it is deeply theorized through the Foucauldian notion of “mob” since the first chapters. Once again, the term has not to be considered in sociological or quantitative terms but as the autonomous fact around which governmental practices take shape. More importantly, the political dimension of the migrant mob is retrieved through an attempt to theorize a collective subjectivity, skimming the individualism that shaped the liberal conception of agency. The debate on the “autonomy of migrations” is irreducible to the “autonomy of single migrants”, which in contrast props up what Tazzioli defines the “antinomies of freedom and autonomy”. In any case, migrant struggles are always considered in their constituent ambiguities: the case of a refugees’ occupation to reclaim humanitarian debit cards in Athens exemplifies how the very definition of “freedom” is a battlefield on which to build subaltern autonomy by detaching it from concessionary conditions set from above.

The Making of Migration offers a deep theoretical rethinking of long-term fieldwork, directing our attention on the multiplication of border zones. In dialogue with a vast corpus of contemporary literature – ranging from security studies, humanitarian governance, mobility studies and data politics – it offers both methodological and analytical insights on the governmental making of migrant subjects as well as on its constitutive antinomies.

Martino Sacchi Landriani is a postdoc in colonial history at the Université Paris-Nanterre (ESNA-MA). His research interests involve identification technologies and the mobility of labor in nineteenth century France and colonies.

Martina Tazzioli is lecturer in Politics and Technology at Goldsmiths University. She is the author of Spaces of Governmentality: Autonomous Migration and the Arab Uprisings (2015) and co-author with Glenda Garelli of Tunisia as a Revolutionised Space of Migration (2016). She is the co-founder of the journal Materialifoucaultiani and a member of the Radical Philosophy editorial board. 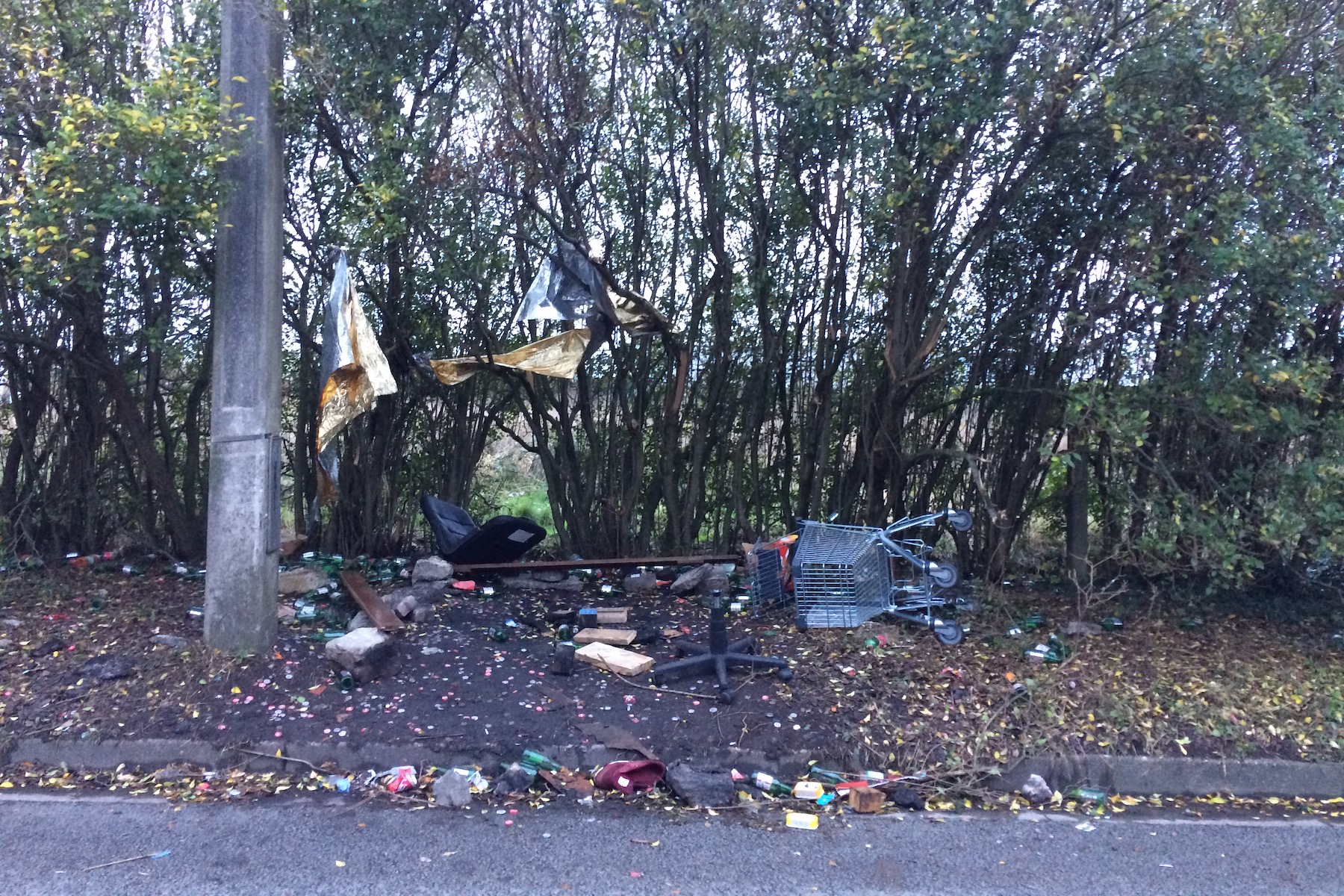 Inhabiting A Hostile Environment: The Sanitary Politics Of Life At The Post-Camp Calais Border

Today, the displaced in Calais are campless. Their lives are lived furtively in forests on the fringes of the city while they seek clandestine passage to the UK.