‘Charlie Hebdo’ And The Politics Of Response

This collection of short, largely spontaneous responses, edited by Angharad Closs Stephens, seek ways of responding to this event that refuse the ‘imaginative geographies’ of ‘us’ and ‘them’ (Closs Stephens), as well as other familiar framings through which this event has become known, but all nevertheless note the very difficulties of addressing ‘Charlie Hebdo’ otherwise, and in ways that refuse the ‘languages of terror’ (Ferreboeuf) in particular.

here have by now been many pieces published in response to the events that took place in Paris between 7 and 9 January 2015 that we now associate with ‘Charlie Hebdo’. Indeed, so much has been written that the novelist Hari Kunzru claims that he can barely bring himself to sit down and read the commentary. Many of us will share the feeling that we can’t bear to hear any more about the War on Terror: about the familiar discourses of ‘civilization’ and ‘barbarism’ (Marshall), the ‘political-theological spectres’ that hang over the event (Leshem), the recognisable pattern of ‘mobile, irruptive violence’ (Coward) and the style of the event, which quickly finds its ‘genre’ in 24 hour news media (Anderson).

Spectacular acts of violence such as those witnessed at the Charlie Hebdo offices on the 7th January 2015, where 8 journalists including the magazine’s editor, 2 police officers, 1 caretaker and 1 visitor were killed, are of course designed to demand a response. Such events, and the responses by political leaders to them, are also designed to polarize opinion, and to bolster ideas about ‘us’ and ‘them’. On this occasion, those ideas played out in the affective atmospheres conjured by the #jesuischarlie hashtag, which invited people to position themselves as either ‘for Charlie’ or ‘against Charlie’. Tariq Ali writes that this compulsion to announce ‘Je suis Charlie’ reminded him of the mood in the UK and US following the events of 11 September 2001, a mood described by Judith Butler (2006) as one of ‘heightened nationalism’, which made it impossible to oppose having to be ‘with us’ or ‘against us’, or query the terms through which that opposition was framed.

What is going on, then, in this compulsion to respond? What is at stake in the scenes of ‘liberal solidarity and resentment’ (Baldwin) that we witnessed on the 10th of January, in one of the largest collective gatherings to take place in Paris since the Second World War? How do some of the responses circulating serve to solidify identity positions, re-draw power positions, so that the shock of the event nevertheless returns us to a familiar politics, where some can feel comfortable whilst others, especially minority communities, are placed on the alert? If these attacks, and others like them, are purposefully designed as ‘affective forms of violence’ (Coward), then perhaps remaining indifferent to the event of ‘Charlie Hebdo’ might offer an alternative ethical response.

This collection of short, largely spontaneous responses were first presented at an event organized by the Politics-State-Space research cluster at Durham University Geography Department. All of the contributors seek ways of responding to this event that refuse the ‘imaginative geographies’ of ‘us’ and ‘them’ (Closs Stephens), as well as other familiar framings through which this event has become known, but all nevertheless note the very difficulties of addressing ‘Charlie Hebdo’ otherwise, and in ways that refuse the ‘languages of terror’ (Ferreboeuf) in particular.

Thanks to all the participants who took part at the original event, all the contributors, and especially to Ben Anderson, Martin Coward, Paul Harrison and Natalie Oswin for their encouragement.

Scales Of Response: Between Elsewhere And Civilization Itself

By recalling the long and bloody colonial history that tethers France to North Africa, we can recover the “events in Paris” from the ahistorical timeline of the War on Terror. And yet, we cannot draw a straight line from Algiers to the Charlie Hebdo offices in Paris.

‘Charlie Hebdo’ happens as part of a maelstrom of potential events in the evental time of 24 hour and social media. Very different events replace one another in quick succession. Almost anything can be an event to be mediated, provided it has or can be given the qualities of surprise and disturbance and it affects or might affect some kind of valued life.

Technology, media, issues of security, of politics…all this left no time for silence, to acknowledge and engage creatively with the semantic instability that arises from acts of terror, instead giving rise to a divisive and discriminatory language that by instrumentalising images of rupture perpetuates a form of symbolic violence which denies any possibility of radical change.

So where does this leave me in terms of responding to Charlie Hebdo? A bit muddled? Maybe. Uncertain? Yes. But also searching for another mode of politics the starting point for which lies, perhaps, with the realisation that the critique of liberal racism is already mainstream.

Toward Another Political Theology

A political-theological spectre hovers above the violent events that have taken place in France, and the responses that followed them. Its role remains largely ignored, or at best, is considered as the dark irrational force driving what Michael Waltzer described recently as “Islamist zealotry” backed by “religious militancy”. I want to offer an alternative to this intellectually impoverished use of political theology, one which is not confined to familiar Greco-Roman or Christian models. 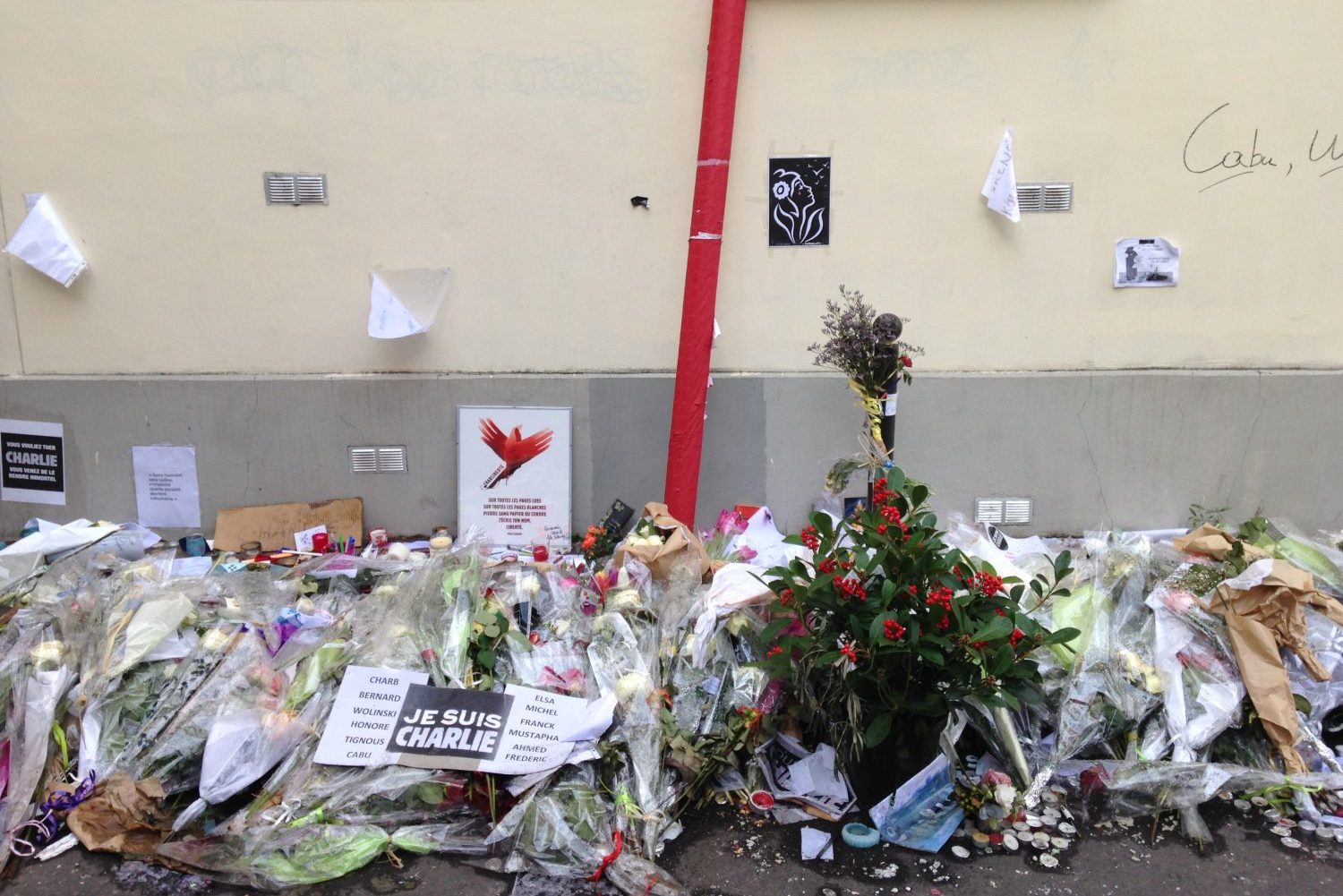 One of the prevailing images in response to the Charlie Hebdo attacks is that of people spontaneously taking to the streets holding pencils in the air. This was an act that resonated with arguments about ‘free speech’ but it also raised broader questions of the relationship between arts and politics, and what aesthetic responses to ‘terrorist’ events might offer.

In reflecting on the recent attacks in Paris – and more recently Copenhagen – I am struck by the manner in which a pattern of mobile, irruptive violence can be traced from these events to Nairobi, Boston, Mumbai, London, Madrid and before that Tunisia and New York. This is a form of violence that is distinctively urbanised: a form of urban insurgency that exploits urban technologies/infrastructures – cars, rails, roads – and urban morphology – enclosed and crowded spaces – for maximum effect.